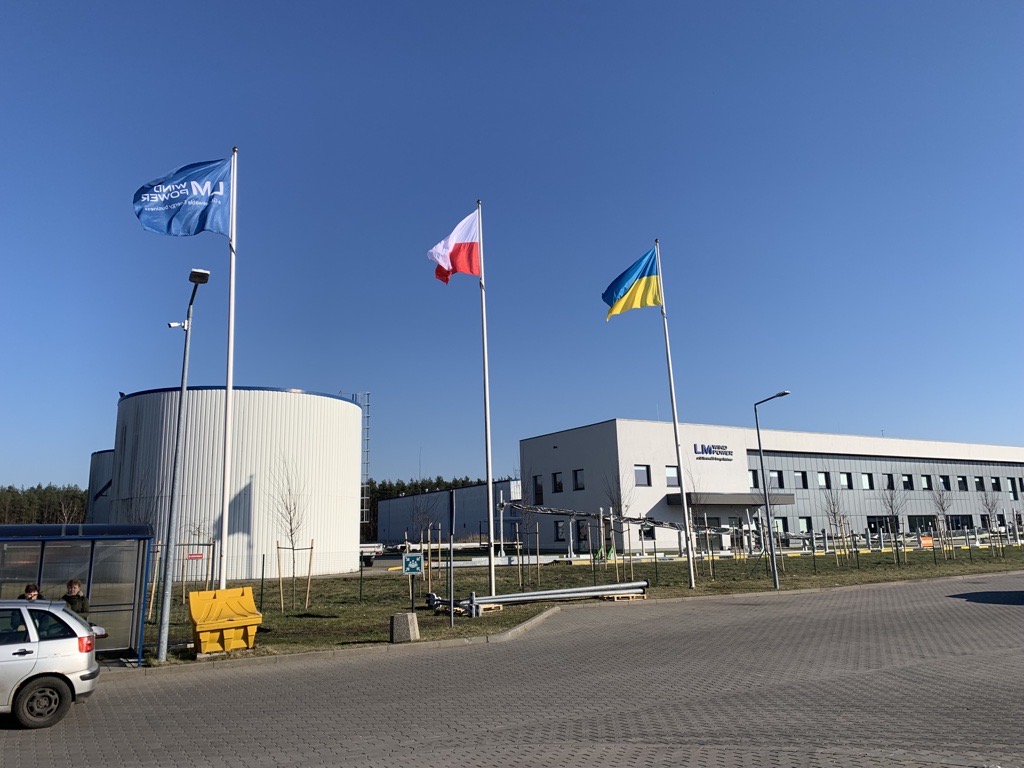 Leading with Humanity in Times of Crisis

People are at the center of everything we do at LM Wind Power. So, when a humanitarian crisis unfolded in February 2022, with thousands of Ukrainian refugees fleeing their country, our colleagues stepped up to support and ensure the safety and wellbeing of their fellow teammates from Ukraine. Over 300 people from the East European country were working at LM Wind Power plants in the regions covered below, at that time.

Keeping our philosophy of ‘people first’, the teams at various plants in Poland, France and Spain started evolving strategies to provide both direct aid and long-term assistance to the community at large. Plant leaders and colleagues went above and beyond the call of duty to meet the needs of our own employees who were affected, as well as of the increasing influx of refugees across Europe.

Goleniow leads the way to change

Our plant in Goleniow, Poland, employed over 200 Ukrainians, necessitating the management to assess the impact on them and to design required support systems. The plant’s teams responded to this emergency timely, with five people from various departments heading the initiatives, namely Maciej Grzybowski, the Plant Director, Anna Alwin, HR Manager; Tomasz Czapeczka, Production Manager; Katarzyna Zywot, Finance Manager; and Luiza Czaja, Communication and I&D Lead, Europe - to actively brainstorm and decide on steps, direction, and coordinated individual actions. These are few of our many Game Changers in the plant responding actively to the need of the hour.

To express their unity, various employees along with the plant director, hosted more than 150 refugees in their homes and arranged contributory activities for them. The plant’s ability to extend help and address concerns of its Ukrainian employees with the onset of the conflict has been remarkable. It is noteworthy to mention that the Goleniow plant employs 7 nationalities, including Russian and Belarusian colleagues.

Luiza, a Game Changer not only at the plant but for the Europe region, unambiguously made it clear that “it was imperative to impress upon the fact that everyone is equally distressed by the events and are to be treated with the same amount of empathy and respect.”

Presently the local management team at Goleniow, Poland, is making special efforts to fill up open roles with Ukrainians and hereafter 30% of new hires at the plant will be from Ukraine. This has had a cascading and inspiring effect upon the plants in Cherbourg and Castellon, for also hiring potential Ukrainian employees.

The local HR arranged for medical services and addressed the employees’ psycho-social needs and concerns through a hotline. A lawyer service was delivered to help our colleagues’ families and friends with government regulations, refugee status and upkeep, medical support, as well as assisting the authorities in pick-ups from borders and stations.

Other plants in Europe extending compassion and joining the efforts

At the Castellon plant in Spain work 9 Ukrainian colleagues, who also received psychological health assistance for them and their families. Colleagues volunteered gathering essential items which were sent to Goleniow, then transported to the borders partly for refugees and partly sent directly to Ukraine.

As one of our Game Changers, Cristina Fidalgo is grateful for the plant’s support and mentions the employees’ philanthropic efforts, “From the first moment it was wonderful to see how the plant turned to the affected Ukrainian colleagues offering them support and comfort. Thanks to the solidarity of all the workers in the campaign to collect food, clothing, medicine and other essential items, we were soon able to start making shipments”.

The team at Ponferrada plant, Spain, collected and sent food and medicines to Goleniow plant for further distribution.

In the same shipment were numerous handmade drawings made by employee’s kids.

The efforts at Cherbourg were driven by our Game Changer Emeline Bichet, Communications Specialist for the plant. She mentions the impact of the ordeal on everyone there, “A humanitarian crisis anywhere in the world is always a big deal, but this time it felt very close to home. It was heart-warming to see how fast we were able to gather supplies to help the people in need, and our plant didn’t stop there because we knew that after we responded to the emergency, we also had to help the people who had to flee their homes and reconstruct a new life in a brand-new country.”

Emeline and Anne Biard, Manager, mobility team supported our 23 Ukrainian employees there. 30 teammates helped collect money, other essentials and hygiene related goods to be driven to the camps set up near Poland border.

Presently the plant is ready to welcome 15 newly hired Ukrainian displaced nationals while trainings in Ukrainian language are being held for them by HR; and simultaneously the plant is working closely with local institutions to habitat them locally. They are also planning on hiring another group soon.

Standing together as humanitarians

It is said that adversity does not build character, rather it reveals it. As tough conditions in Ukraine continue, our colleagues across Europe are leaving no stone unturned – to offer support and take action to help those affected by its aftermath. They are our true #LMGameChangers, who have upheld the fundamental ideals of inclusivity, while ensuring continued humanitarian protection and assistance.

They have proved that inclusion is not just a slogan at LM Wind Power but it is in our DNA itself. In an uncompromising manner, in the way we think, and operate, with the central objective of placing people and human values above all.